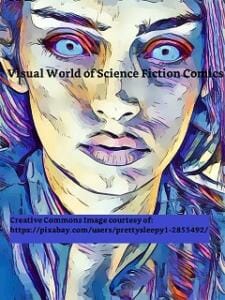 In the visual world of science fiction and fantasy comic books, even the text takes on the aspects of a illustrated creation designed for the express purpose of emphasizing a larger-than-life environment. Simple words such as “fantastic” are drawn as blazing over-capitalized displays. A single word sometimes consumes a series of panels. As such, these exaggerated effects occasionally produce strange reactions from the reader.

At a very early age in my life, science fiction and fantasy comic books captured the focus of my imagination and my outlook on life. Superman was powerful but corny and illogical, but I still looked at everyone I could lay hands on. Casper failed to expand into the greater realm of fantastical, but the humor and moral backdrops continued to trigger my joy. Ah, but for me, Spiderman was the essence of a hero: Troubled but resilient. Principled yet confused. Intelligent and able to overcome through the mind as well as body and skills.

Check out the “The 15 Most Iconic Comic Book Sound Effects” here.

So, while enjoying my daily intake from the visual world of science fiction comic books, I taught myself a new and personal language. By merging the wonderful pictorials of science fiction and fantasy comics, into my shallow understanding of words, I began to assign meanings to the blazing, over-capitalized lettering. But making up a personal language comes with one great drawback; the process affected my speech, my ability to learn and my relationship with parents and teachers.

A mere few days after I started attending grade school, problems broke out – back then, we did not do kindergarten. As was a reasonable application of the evidence, my first-grade teachers assumed that I was speech-impaired. The words that I had created and spoke no link to the standard and practical methodology of correct pronunciation. I did pretty well, though, often getting very near to the proper clarification of certain words. At any rate, I did well enough that most adults just took my sometimes-strange pronunciations as funny rather than serious. I had very little problem with common words that I picked up by ear. 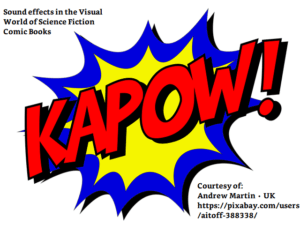 The iconic symbols for comic book sound effects: Kapow! Ktang! Spak! and so on, affected my writing, reading and pronunciation of new words. You see: those strange sound-effect terms served as the roots of my personal language. I would look at the pictures, ask my parents how to pronounce the likes of Pum, Neeyakk and Whaam. These were the BIG words, important words. At the time, I did not care about the smaller text or the ongoing conversations between characters. Thus, words such as WOK, BOK and SOK became the core of my assigned meanings for letters and text. Lots of errors followed. Slurring of words. Misused vowels. And so much more.

The first-grade teachers set me up to attend speech training and therapy. At first, it went slowly. I was confused. Why did the teachers not understand how to read? But eventually, the speech expert uncovered the problem. I was not speech-impaired. I was too-smart impaired.

And now, even to this day, I sometimes catch myself pronouncing words according to my old science fiction and fantasy comic book language system. It is fun, at times, to do this play on words. But when my wife catches me putting a twist on road signs, it feels like back to grade one.

Thank you, all you creators of in this wonderful visual world of science fiction and fantasy comic books.

Get In On The Read. Let the Visual World of Science Fiction Comic Books Take Shape In Your Life

Voidstalker – A Tale Of Genetic Engineering

What glitters is gold, but beneath it is rot.Humanity has a sprawling interstellar empire. Advances in science and the resources of countless frontier worlds have brought untold prosperity to its citizens. But how much of this wealth comes from dangerous experiments with alien technology?As an elite...