MMO Cloud Computing: What Experts Can Learn From a Gaming Tool?

Why are cloud industry leaders paying attention to applied MMO Cloud Computing technology? With so much focus on Twitter, Facebook, and other interactive social sites, some would say that the cloud already takes advantage of Massive Multiplayer Online (MMO) business methodology.

But do the facts bear out the assumption?

At first glance, it appears that Data Center Infrastructure Management (DCIM), Software as a Service (SaaS), and other cloud industry focal-points fail to reap from the resources and fan-centered business patterns associated with the MMO product development approach, Perhaps the excessive interactive features of the MMO business core are not universally successful. Let us ponder this matter.


“Services first, products second.” This is the primary concept of MMO game marketing. The process centers on achieving that crucial shift that nudges customers into the realm of product enthusiasm wherein a user becomes a fan. Business is no longer a mere matter of product promotion and quality customer service. In the online video game industry the game does not shape the customer, the customer shapes the game.

In a model MMORPG, the interaction of the customer is interwoven into the very fundamentals of product expansion. Read, compare, and adapt: these are decisive components of MMO business models. Those who create MMO games must pay attention to what fans like and dislike, what suggestions are approved and disapproved by the majority of the fan base, and what adaptations to the product best fulfill those areas of fan concern.

Heads Up For Incoming Feedback, What’s Up With MMO Cloud Computing Feedback


Any product creation and improvement process that centers on user wants, likes, and dislikes must maintain an open point of communication. Rapid service response is critical to the development of what gaming world enthusiasts call “raving fans”. It is the “raving fans” who will bring about new players, new enthusiasts, and more “raving fans”.

The pervasive power of Internet message boards and Twitter type services open the floodgates for incoming community feedback. Free advertisement accumulates around a fan base that cannot get enough of a given product. Even the adverse discussions generate feedback that can lead to new business. The fans actually become an extended, word-of-mouth, sales force that promotes the product, the business, and the value of being a fan. For an interesting read on the concept of “raving fans”, consider the Ken Blanchard and Sheldon Bowles 1993 edition of  “Raving Fans A Revolutionary Approach To Customer Service.”

A View From The Negative Side Of MMO Cloud Computing


Any successful business model must eventually lead to profits. Otherwise, the doors close, no matter how virtual they may be. So, is profit the normal outcome for those who venture into the MMO “fan” methodology?

One popular author teaches that there is error in the presupposition that the majority of businesses in the MMO industry are pulling a decent income for a reasonable day’s work. In fact, his conclusion is that the fundamental patterns associated with the MMO business model sets developers into the doorway for failure. Here are three brief reasons for this belief:

Assuming that the cloud industry boldly pursues the MMO business model, they will most certainly face the same challenges as those that pertain to the game industry, and perhaps many new ones as well. The mindset of gamers, read this as fans, involves a certain inner pleasure at being a part, no matter how unique, with the winning team.

But are business users interested in playing the role of a fan, or are they seeking only to find hardware and software that gets the job done quicker, easier, and with greater accuracy? Perhaps business users want only to finish work so that they can get home to their favorite MMO game. 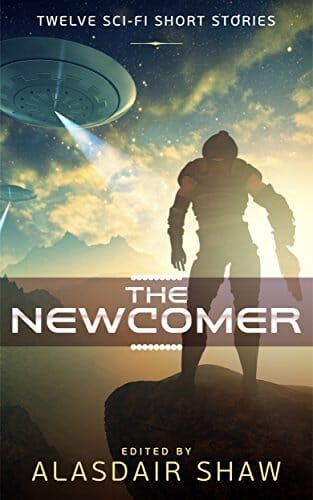 From a young couple struggling to look after their baby to a new captain's reluctance to take command of her ship, and from a sun-addled stranger's appearance in town to the emergence of a sentient AI, the twelve tales presented here explore the central theme of an arrival by someone or something ne...